On June 15, 2022 Father Carl Beekman became the pastor of St. Anthony of Padua Parish, one that has been served by Franciscan priests for 89 years.

Father Beekman was born in Terre Haute, Ind., and attended Bedford North Lawrence High School in Bedford, Ind. He also attended Indiana University, the University of Southwest Louisiana and St. Joseph Seminary College in Covington, La. He studied philosophy at St. Joseph Seminary, then theology at Mount St. Mary Seminary in Emmitsburg, Md. Much later he studied at Catholic University of America, earning a master’s degree in financial management in 2018.

He is a convert to Catholicism and, prior to entering studies for the priesthood, served in the Marine Corps and as director of finance for The Private Group, Inc.

He was ordained to the priesthood by Bishop Thomas G. Doran at the Cathedral of St. Peter on May 20, 2000.

He became diocesan director of vocations, from May 2010-February 2012, serving also as administrator at the Cathedral of St. Peter from July 2011-February 2012 when he became rector there until 2014.

Father Beekman served as pastor at SS. Peter and Paul Parish in Cary from 2014-2018.

He has served since then as pastor at St. Mary Parish in Sycamore. 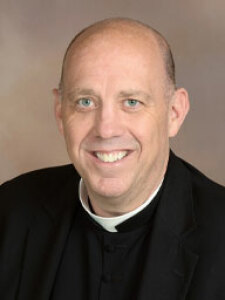